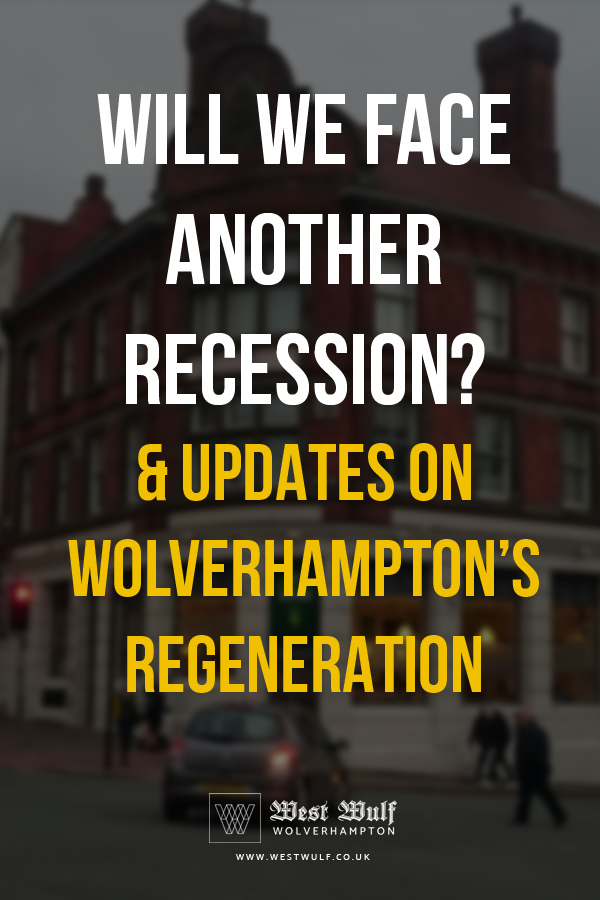 A question that is on the minds of many people at the moment – will we face another recession? The COVID-19 pandemic put a halt to the national economic recovery, with all but essential businesses being unable to trade. June 15th has seen many businesses fling open their doors for the first time in months, with queues of people – most of the time keeping to the 2 metres distance required, eager for a semblance of normality to return to their lives. But is the damage already done for many businesses?

In Wolverhampton, the Hungry Bistro on Lichfield Street announced this past weekend through social media that they are to cease trading. The hospitality industry is taking the worst hit. Pubs, restaurants and hotels are balanced on a knife edge and some will inevitably fall the wrong side.

Will we face another recession? Yes, we’re in it already. On May 7th, the Bank of England warned that GDP would fall by 25% this quarter and the economy would shrink by 14% overall in 2020 as a result of COVID-19 and efforts to contain it. There is a silver lining however – the BoE also predicts that the economy will grow by 15% in 2021.

How is Wolverhampton doing from a financial perspective?

Wolverhampton is facing the same financial struggles that many small cities throughout England are at present. A trip to Wolverhampton centre between April and mid-June would have been very quiet, with only a small amount of businesses open. Prior to COVID-19, investment was beginning to pour in and things were looking up. Work on the ambitious Westside project was about to get underway, the Mander Centre was filling up those empty units and Wetherspoons had announced a refurbishment along with hotel and museum in the buildings opposite the Grand Theatre. Wolverhampton Wanderers were pushing on with plans to redevelop Molineux to accommodate the many fans on the waiting list for season tickets – plans which have now been scaled back slightly.

A recent report pointed to City of Wolverhampton Council having to scale back and close some buildings – though, with successful home working trialled over the last couple of months, this may not be a surprise.

There are positives. Wolverhampton’s railway station is 50% complete, with the first section now open – though seeing much reduced use at present. Work on the Civic Halls is set to be complete towards the end of 2021 – something that is needed to increase foot traffic in the city centre and boost Wolverhampton’s nightlife. The groundworks at i9 on Railway Drive – a cornerstone of redevelopment in Wolverhampton, are almost complete. And things may not be over yet for The Hungry Bistro.

A fundraiser has been started by Jade Field in an attempt to get The Hungry Bistro back on its feet. After all, it sits in a prime location opposite the Wolverhampton Interchange and is a building away from the i9 development – it is sure to do well with owner, Richard Brown steering this enterprising independent if it can be saved and once works on i9, the railway station and Midland Metro extension are complete.

In between The Hungry Bistro and the soon to be i9 offices, is the Prince Albert. Owner Shaun Keasey has in the past been vocal about poor treatment of independent businesses in Wolverhampton, especially due to lack of access during the Midland Metro extension work. Shaun is the chairman of Wolverhampton’s pub watch and, it was announced recently, will be opening a new piano bar in the heart of Wolverhampton at Queen Square. The bar is to be called Bogart’s and will be sited in the former Nationwide Building Society at 23 Queen Square.

We can only hope that, with government coronavirus measures slowly lifting, Wolverhampton’s regeneration will get back on track and the recession is a short one. Will we face another recession? We are. Can we beat it? If those of us with money to spend are able to spend it locally, there’s a chance that our independents will survive.

This website uses cookies to improve your experience while you navigate through the website. Out of these cookies, the cookies that are categorized as necessary are stored on your browser as they are essential for the working of basic functionalities of the website. We also use third-party cookies that help us analyze and understand how you use this website. These cookies will be stored in your browser only with your consent. You also have the option to opt-out of these cookies. But opting out of some of these cookies may have an effect on your browsing experience.
Necessary Always Enabled
Necessary cookies are absolutely essential for the website to function properly. This category only includes cookies that ensures basic functionalities and security features of the website. These cookies do not store any personal information.
Non-necessary
Any cookies that may not be particularly necessary for the website to function and is used specifically to collect user personal data via analytics, ads, other embedded contents are termed as non-necessary cookies. It is mandatory to procure user consent prior to running these cookies on your website.
SAVE & ACCEPT
×
×